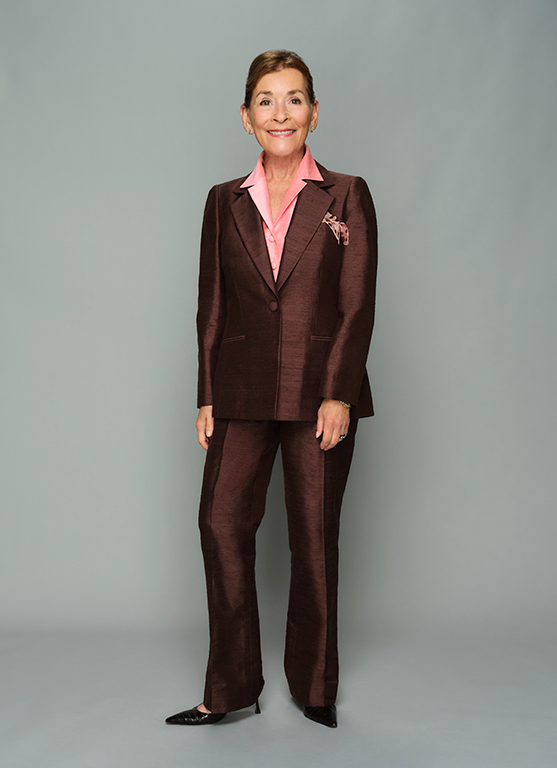 Leading the Way for Women in Law

Long before Judge Judy Sheindlin ’65 presided over court cases—both as a family court judge and on TV—she lived on Flatbush and Parkside Avenues in Brooklyn. In a twelve-story apartment building, her aunts, uncles, cousins, and grandparents were all an elevator ride away.

As an eight-year-old on one Yom Kippur—when Jewish people atone for their sins by fasting, abstaining from the use of mechanical devices, and more, depending on observance—the young Judge Sheindlin set out with her family to help bring her grandfather home from the synagogue, as they did every year.

As the family returned to the apartment building, the Judge’s grandfather veered away from the elevator and toward the stairs. She tugged on his prayer shawl and asked why he wasn’t taking the elevator. He explained the observance: “On Yom Kippur,” he said, “we atone for everything we’ve done wrong in the past year. We don’t eat, and we don’t use electricity.”

Judge Sheindlin took the information in and displayed an early use logic. “That translated to my eight-year-old mind: If you do the right thing all year, you can eat on Yom Kippur and take the elevator!” In the decades since, the family court judge turned television icon has had a remarkable career. In court or in televised arbitration, Judge Sheindlin has adjudicated thousands of cases, and her connection to NYLS remains strong: Both her daughter, Nicole Sheindlin ’93 and granddaughter Sarah Rose Levy ’22 graduated from NYLS. In 2022, Judge Sheindlin presented a diploma to her granddaughter at her graduation. It’s especially gratifying, Judge Sheindlin says, to have a passion for the law in common with two generations of women in her family—and a shared history at NYLS.

After growing up in Brooklyn, Judge Sheindlin received a B.A. from American University in Washington, D.C. She graduated with a J.D. from NYLS in 1965. She passed the bar that year and began her job search, where she was repeatedly asked “how fast do you type?”—a question better fit for a secretarial position than a first-year associate. (“Me? I could neither type nor sew,” she quipped during her Commencement address.) Her first job was essentially administrative at a cosmetics firm, while her male counterpart got to practice actual law. She left the firm, got married, and had children.

But, after a few years, “I found I wasn’t happy being defined as someone’s wife or someone’s mother,” she said in her address, and she went back to work as a lawyer in the Family Court of Manhattan. There, she saw injustices in the court system and failures to serve communities. She promised herself that should she ever be in a position of power, she would ensure everyone maintained their rights and dignity.

In 1982, Mayor Ed Koch appointed Judge Sheindlin as a family court judge. By 1986, she was promoted to the role of supervising judge in the family court’s Manhattan division.

In the early 1990s, Judge Sheindlin began to gain national attention, and in 1996, she launched her TV career with the premier of Judge Judy. Over the show’s 25-season run, Judge Judy brought in 9–10 million viewers per day. Among the numerous awards were multiple Daytime Emmys for Outstanding Legal Courtroom Program. Judge Sheindlin also received a star on the Hollywood Walk of Fame in 2006 and an Emmy Award for Lifetime Achievement in 2019.

“Judge Judy Sheindlin is a powerful and inspirational American icon,” says Dean and President Anthony W. Crowell. “She reflects the extraordinary presence and promise of our profession with women at the forefront of its leadership. I am beyond grateful for her vision, generosity, and trust, and I know the Honors Scholars Program will have an enduring impact.” When Judge Sheindlin sat for an interview for this article in the summer of 2022, she was fresh off an Emmy nomination for Judy Justice. (The show went on to win the award.)

She’s reflective about the changes in the legal landscape since she started out. When Judge Sheindlin was coming of age, “you were either a schoolteacher or a nurse, and you did those two things until you married someone who could afford to support you. Those were the rules. And if you broke those rules, it was an oddity,” she says.

There’s been real change over her lifetime, and that change has been hard-won. She recalls a conference in the mid-’80s for New York State judges. During a presentation from a commission on gender bias in the court, a woman explained to the mostly male judges the ways in which comments made in court were disparaging to female legal professionals.

“It was things that male judges would say to lawyers: ‘Don’t wear pants to my courtroom. I like women in skirts.’ It's demeaning as a lawyer. Back then, it was sort of standard fare,” Judge Sheindlin says. While this presenter was trying to educate the judges about appropriate behavior, a table of attendees started yelling disparaging remarks at her: “You’d be better off in skirts, too!” Judge Sheindlin remembers with crystal clarity what happened next. The presenter looked straight at the rowdy table of yelling judges and said, “Perhaps a whole generation has to die off.” It left a mark on Judge Sheindlin. “She was right.”

But for all the change that has happened since then, Judge Sheindlin is clear: There is more work to be done.

In order to continue that change, Judge Sheindlin has left an enduring legacy at NYLS: the Judge Judy Sheindlin ’65 Honors Scholars Program. The program also established a partnership with nonprofit Her Honor Mentoring, a community of more than 1,700 mentees and mentors, which was founded by Judge Sheindlin and her daughter, Nicole, and encourages young women to explore different career paths.

As for the future of women in law? “Boundless,” Judge Sheindlin says. “Just boundless.” The partnership between NYLS and Her Honor Mentoring will aim to serve both communities with events, law student shadowing days, mentoring, and more. And the partnership exemplifies so much of the NYLS ethos: concrete work to better the legal profession.

“Judge Judy Sheindlin is a powerful and inspirational American icon,” says Dean and President Anthony W. Crowell. “She reflects the extraordinary presence and promise of our profession with women at the forefront of its leadership. I am beyond grateful for her vision, generosity, and trust, and I know the Honors Scholars Program will have an enduring impact.”

As for the future of women in law? “Boundless,” Judge Sheindlin says. “Just boundless.”

Skip back to main navigation